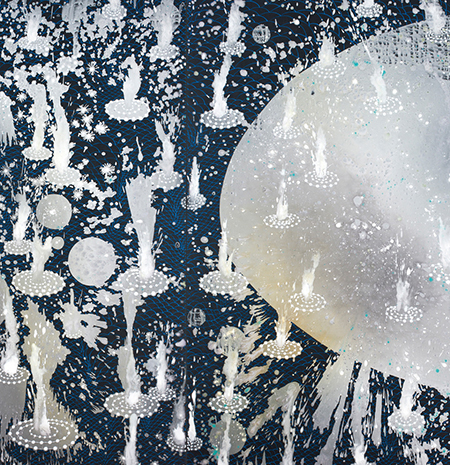 With the aptly titled show “Manifold,” Barbara Takenaga presents abstract paintings of varied sizes that offer a sublime immersion in many worlds at once. One can visualize not only the starry expanses of deep space, but also the murky depths of oceans and the sinuous forms found in terrestrial life. The New York-based Takenaga is known for an acuity with paint and for minute, repetitive brushstrokes that lead to sweeping and undulating forms across a canvas. Add in carefully placed dots, netting and drips, as well as a vibrant palette often bordering on pearlescent. The effect is otherworldly and transportive. In the 1970s, Takenaga moved from her art training at the University of Colorado into graphic design and printmaking. She then aligned with the feminist, anti-Minimalist concepts of the Pattern and Decoration movement. Like many female artists, she proved P&D could move beyond the ornamental into intellectually challenging terrain.

The centerpiece of current show, “Manifold 5,” consists of five panels stretching more than 18 feet. The profusion of silvery white geysers spurting from concentric circles on an inky blue background might be experienced as spontaneous, but really it’s methodical. As with many of Takenaga’s pieces, the evocation of cosmic phenomena is a common point of entry. There are misty areas of lightly applied paint suggesting auras, as well as globes that are evocative of planets and suns. On the other hand, a more modestly sized work such as “E Floaters” seems grounded in cell biology or ocean ecology. Eye-shaped creatures, complete with cilia, swim through a painstakingly rendered expanse of silvery white scalloping. Even a 10 by 8 inch work such as “Small Red Up” is admirable for its mesmerizing repetition of sperm-like forms stretching upwards on a scarlet surface. Increasingly complex the longer they are viewed, Takenaga’s work resonates with the push-and-pull of biological order and chaos, whether it’s concerning the macrocosm of space, the microcosms of tiny organisms or so much in between.