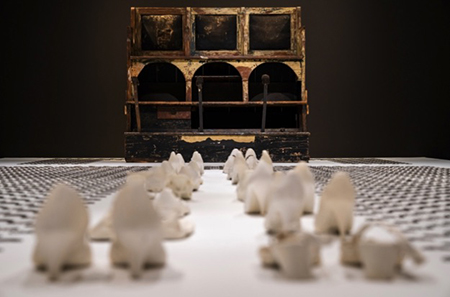 Every time we go to sleep, we slip into the involuntary cinema of our subconscious. When we actually remember a dream, it can evoke a surreal creativity that surpasses even the wildest imagination of the conscious mind. It’s no wonder, then, that dreams have entered artists’ work throughout the ages. “TAP: Investigation of Memory” — an expansive church of a room carpeted with over a thousand gleaming silver shoe taps — is from Mildred Howard’s dream. A central corridor in midst of the pattern of pews full of taps features a procession of 10 rows of shoes, two pairs abreast, all different, and all white. At the end of the corridor, like a darkened altar, looms a highly weathered and worn shoe-shine stand.

Whether conscious of it or not, Howard's dreamscape echoes the reality of tap dancing’s evolution — a visceral and rhythmic dance form invented by African American slaves and Irish indentured servants. In the mid-1600s, in the cotton fields and bunkhouses of the deep south, West African drumming and dance traditions merged with Irish clog and step dancing to produce what we now know as tap dancing. But Howard’s placement of the silver taps doesn’t suggest the organic, sinuous, graceful moves of Fred Astaire and Ginger Rogers. Rather, they are, in row after row, like the regimented configuration of a military formation. Were shoes actually attached to each of the tiny silver plates, and people attached to the shoes, it would look like a small army. The march of the rows of empty white shoes to the shoeshine altar suggests a joyful romp — or a somber journey ending in servitude. It is in these disconnected, ambiguous tensions that “TAP” radiates it’s brilliance. Invisible music hangs in the air, but we can’t hear a note.