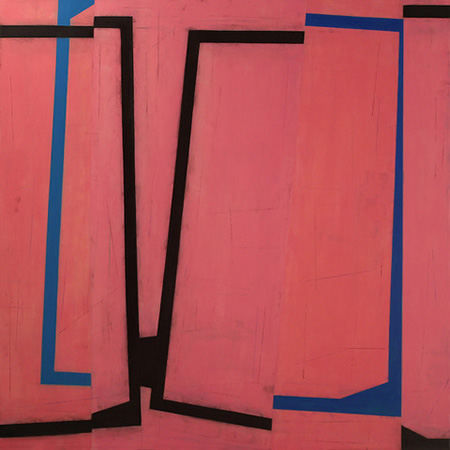 When playfulness is seen in geometric abstraction it can distract from its communicative powers. The five artists in “Beyond the Framework” want to evoke a double reaction — not only the superficial pleasure of viewing carefully arranged shapes, lines and dots, but also a deeper examination of each composition’s message. Beyond the precision of geometric abstraction, each artist strives to engender thoughts on such topics as urban encroachment, the interruption of patterns and the quest for the spiritual. Steven Baris is especially adept at this, presenting oils on canvas and Mylar that critique how barren landscapes have given way to gargantuan industrial parks and other blights. A work such as “Jump Cut E2” begins as a kind of aerial landscape of farm fields — where scratchy lines perhaps designate tracts. But the work is dominated by a garish layer of pink on which heavy blue and black lines suggestive of building blocks are placed at oblique angles.

Alyson Khan clusters all manner of stripes, curves, triangles and polygons into colorful mosaics, but sometimes leaves a small central portion empty or in a muted color, metaphorical hallowed spaces or altars placed in the midst of architectural complexity. “Convergences” is an example of Khan’s alluring technique of interlacing colored stripes without laying the paint on too thick so that a blended color emerges. Hyland Mather resurrects what he terms “lost objects” such as wood blocks, string, nails and rulers into geometrically pleasing stacked bricolages. Joshua Enck’s large-scale steel wire sculptures turn hollowed-out funnels and globes into anthropomorphic shapes. And Frea Buckler’s neon-colored paintings celebrate geometry’s clean lines. “Beyond the Framework” asserts the place of geometry as more than a formal guiding force, but also as an abiding springboard for evocative ideas.