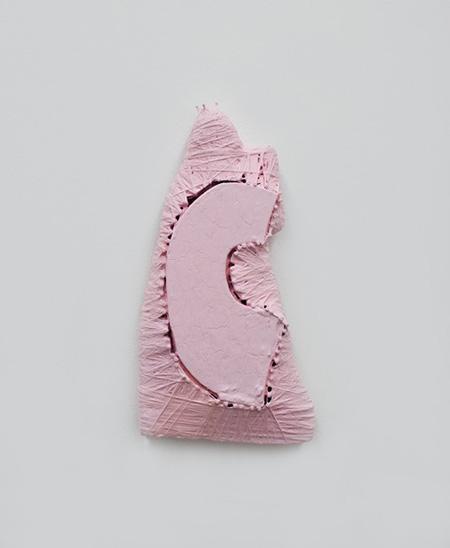 Jamey Hart constructs small, bright, monochromatic paintings using wood, acrylic, glue and that often include altered found objects. Each of the show’s six pieces is presented on a separate gallery wall, providing them with individual viewing perspectives. Hart describes these objects as paintings, although they clearly possess a sculptural physicality. Despite its small scale, “Tucky Posy” provides a potent visual punch. A daisy chain of figurative forms and flower shapes extends out from a frame containing rectangular blocks of wood. The entire piece is painted a distinctive shade of green. “Plateau” is a not readily identifiable form wrapped in layers of fabric and string, inset with a crescent-shaped object and then painted a pervasive Pepto-Bismol pink. It is lent a tactile surface by outlining the crescent with nails and wrapping string around the central form and the nail heads repeatedly. The result is oddly sensual and mysterious.

Hart states that he seeks to capture “some specific visual thought, building upon or opening it, and capturing that in the form of an object.” He keeps his imagery minimal, preferring to focus on the relationships between color and texture, composition and shape. As a painter, Hart simply bypasses the notion of paint on canvas presented in a frame. Painting or sculpture, these objects project a strong presence due to their density, physicality and formality. Hart condenses both emotional and visceral responses to his surroundings. “Casket” encases several objects, including a “paddle” from a mixer and two pieces of wood. Hart has dug out shallow trenches into which they fit perfectly, excavated objects of an unknown origin. A primary object containing smaller elements as though to protect them becomes a key visual theme capable of holding our attention. Hart gets the last word: “When the object severs from any clear connection to the seed that grew it, it establishes a void that can be filled with time spent looking.”