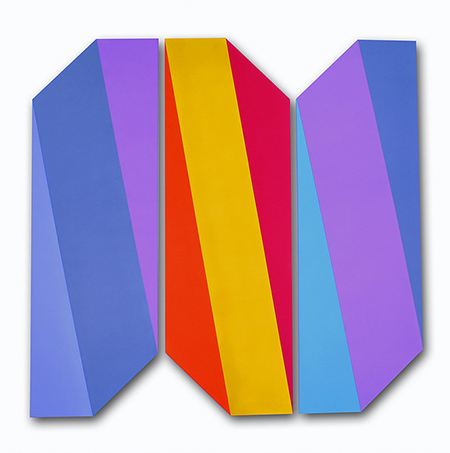 Mokha Laget’s large triptych “Signal Drift” occupies the far wall of the gallery, allowing it to be viewed from a distance. Two large pieces hang on the side walls, while the remaining four smaller works are grouped together near the entrance. Laget’s paintings combine flat, geometric, colorful shapes with the illusion of depth. Watershed, for example, is composed of interlocking forms that, upon careful examination, visually transform into four structures. One morphs into a rectangular block standing on end, a second becomes a three-dimensional quadrilateral, while a third suggests a temple façade with a triangular entrance. The last is a folded flat rectangle. “Cavatina” is less architectural, with its flat quadrilaterals arranged sequentially and divided by thin stripes of color. One section of the trapezoid on the right is folded forward, lending it a three-dimensional quality. Laget takes pleasure in manipulating various shapes to produce confounding effects. While some recede, others project, a phenomenon the artist refers to as “perceptual ambiguity.”

Laget’s distinctive palette is influenced by her early years in the deserts of North Africa and more recently, central New Mexico, with its radiant light and dramatic landscape. Her surfaces of intense color have a velvety texture that results from the use of clay pigments and Flashe, a heavily saturated vinyl paint. Laget attended Corcoran College of Art and Design in Washington, D.C., where she studied among prominent members of the Washington Color School, including Morris Louis, Kenneth Noland, Thomas Downing, Howard Mehring and Paul Reed. For four years, she worked as a studio assistant to Gene Davis, known for his large color-striped paintings. Like Davis, Laget is a gifted colorist, yet her paintings typically begin as small black-and white-sketches that allow her to play with various light sources. Only after the canvases are stretched does she decide on the various colors. The result is, like the show’s title, luminous pieces that deal with the shifting relationships of objects floating in space and their effect on our perception.