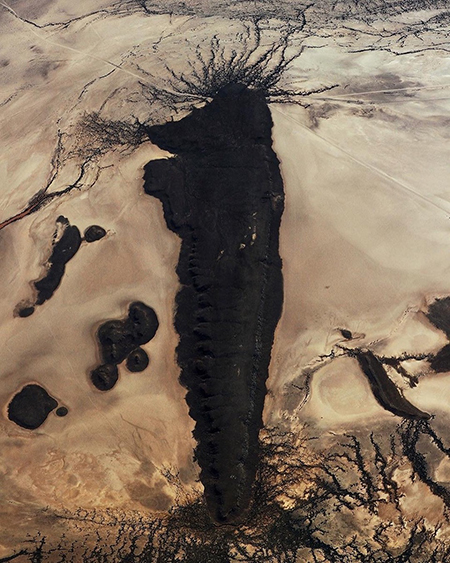 Flying over a volcanic field, Marilyn Szabo captured a compelling image that anchors “Exposure: Architecture and Landscape,” featuring works by four Arizona-based photographers. The work’s title, “The Kachina of Atonement” references spirits of indigenous cultures prevalent in the Southwest, along with the artist’s introspection about her own personal journey. Like an inkblot from a Rorschach test, the photograph lures us to plummet the depths of our own interior spaces. One seeks to make sense of what’s depicted, while also embracing its inherent mystery.

Two works by Johnny Kerr have a similar quality. Both “Three by the Sea” and “Solidarity” direct our attention to stanchions along the California shore, weathered and crusted with organic matter that has accumulated over time. Together, they signal the transitory elements at play in objects and experiences imbued with perceptions of permanence. Two additional works photographed during a road trip with a friend express authentic reverence towards common road signs and traffic cones.

Since 2011, Andrew Pielage has photographed dozens of Frank Lloyd Wright designs, including Fallingwater, his iconic Pennsylvania house (1935). A single Kodak Endure metallic print of the historic home, complete with waterfalls and trees bearing bright rust-colored leaves is presented alongside two different perspectives on the Westward Ho, a downtown Phoenix icon designed by architects Rafael Lake and Louis Dorr in 1928, which was featured in the opening of Alfred Hitchcock’s 1960 film Psycho. Architectural photographs by Peter Brian Klein, printed directly onto aluminum or copper, hang along the opposite wall. Standing out from among this group are several that highlight geometric patterns, tending towards abstraction.