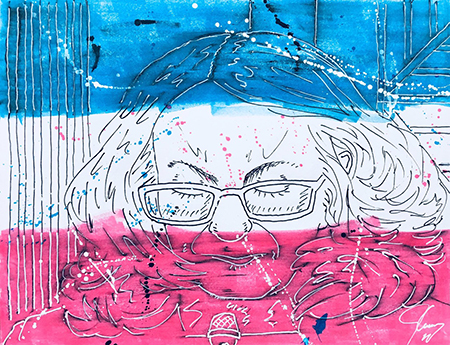 “IndigNATION: Political Drawings by Jim Carrey: 2016-2018” presents a chronological sequence of 100-plus of the actor/comedian’s original drawings for daily tweets. Spanning the period between Trump’s election and the recent midterms, the series reads as a visual diary chronicling the deleterious debacles of Trumpism and includes satirical portraits of Trump and his collaborators. Most of the original drawings, which range from caricatures to poetic or expressionistic renderings, reveal deft draftsmanship and varied temperaments, marked by compelling empathy for victims of the Trump administration’s cruelty.

In “Abnormal Rockwell,” Carrey draws upon art history to express an impassioned plea to stop the madness of our nation’s out-of-control gun violence. Based on Norman Rockwell’s iconic Civil Rights era painting of a 6-year-old black girl escorted by U.S. marshals while walking to an all-white public school, Carrey’s drawing depicts two white teenagers en route to school amidst a blood-stained environment of red paint dripping from blots that suggest wounds and a forceful spattering that traverses diagonally across the composition’s center. Blood-red paint also dominates “Rubio’s Hands,” where the Florida Senator, who (according to artist’s tweet) accepted $3.3 million from the NRA, grins happily as he displays his blood-drenched oversized hands (recalling his infamous comment about Trump’s “small hands”). The color red also plays a significant role in “Smile for Me Darling, I Came Long Way,” created the day that Melania Trump visited a Texas detention center. While a security guard looks on, the First Lady smiles for a photo-op as her wrist dangles nonchalantly over the shoulder of a screaming young girl. The fiery red inside the girl’s wide open mouth convincingly conveys the enormity of her anguish.

One of the most poignant works is a tribute to Dr. Christine Blasey Ford. Depicted as a simple line drawing, Carrey’s image of her testifying is sheathed in horizontal color bands, from top to bottom, of blue, white, and red. While these colors symbolize Blasey Ford’s patriotism, their positioning emphasizes the great divide between the nation’s red and blue constituencies, suggesting that the blue at top could lift her up, while the red below will sink her. Sadly, the Kavanaugh hearings produced the latter.