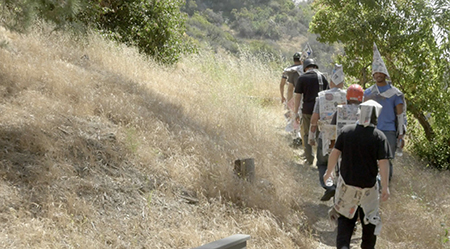 Several “working-age” adult males of varying backgrounds and races come together for a weekend of summer camp — not adult-modulated summer camp, mind you, but boys’ summer camp. As promising a premise for an artwork as it sounds, the reality of its remnants – a two-screen video projection along with  two-level cubby-hole shelving containing paraphernalia from the actual three-day event – is a disappointment of incompleteness. For “Griffith Park Boys Camp,” Tam recruited a group of men (roughly seven, as seen in the video sequences) through an online posting, and led them on what for all intents and purposes appears to be an idyllic long weekend of quintessential boys’ summer camp rituals: hula-hooping, drawing, plaster sculpting, leap-frogging, marching through the wilderness (Griffith Park’s version) in newspaper armor and helmets, and singing campfire-like songs (albeit during the day, and sans fire).

The video also includes brief interviews with three of the campers, at disparate intervals, in which they’re asked about their current and past jobs (they tend to have long and varied work histories). In another solo scene a camper shows off the cartoonish plaster ray-gun he’s made. Isolated shots of several campers seated together performing campfire songs, including silly tongue-out chants as choruses, are the most poignant moments, when the men display vulnerability as they get in touch with their inner boys; but they’re also far too fleeting. While we’re exposed to an array of short scenes from this man-boy happening, stitched together they ultimately come off as no more than a film trailer for a camp that we’re only given a peek at. While the participants’ themselves may have had life-changing experiences, we as consumers of the finished product are short-changed.