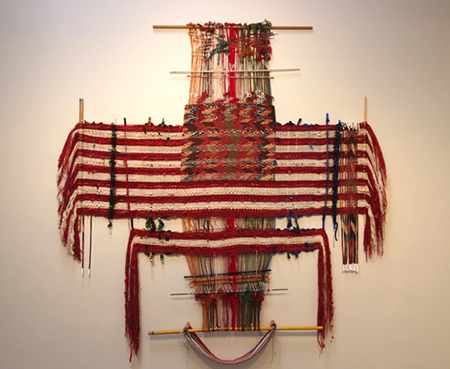 The inclusion of sociopolitical content into contemporary art can be a matter of uncomfortable compromise, the danger being that the content overwhelms the aesthetic (or vice versa). When done well, with conviction and skill, such artworks can lead viewers into areas of experience that are usually terra incognita to art audiences — thematic flyover country, so to speak. Kira Dominguez Hultgren’s education credentials include postcolonial studies, performance art and fine art. In Patagonia, in southwestern Argentina’s Rio Negro province, she studied the Mapuche culture’s warp-faced weaving tradition on a vertical post loom.

Back in the United States, at the Smithsonian archives, she immersed herself in the work of nineteenth-century Navajo weaver, Juanita (Asdzáá Tl’ógí). Hultgren found in her weaving of an American flag not the overwriting and suppression of an indigenous people, but a more complicated expression — an interweaving — of culture and history. The artist’s interests in feminism, oral history and weaving come together powerfully in five complex, large woven sculptures. Titled “Wingspan,” these sculptures connote flight and freedom.

That freedom would be from the cultural stereotypes of the past. Dominguez Hultgren interweaves traditional practices and themes with postcolonial politics to express the complex texture of cultural history; of “approximate assimilation, synthetic identities, and the excesses that stride beyond categorizations. … Parading indigeneity in handspun weft winding through strands of polyurethane globalization …” Her complex constructions, which could be equally regarded as creative, created destructions, conjoin such disparate materials as handspun wool, zip ties, plastic tubing and the artist’s hair. The black eagle of Cesar Chavez’ and Dolores Huerta’s United Farm Workers, adapted from Aztec myth, meets Betsy Ross’ American flag in Dominguez Hultgren’s dynamic, powerful works. Certainly they’re feminist, communitarian, women’s-work updates of the 1930s and 1940s murals of Rivera, Orozco and Siqueiros — but with process, media and images/icons in abstract conflict rather than the heroic allegorical figures of the Depression years.