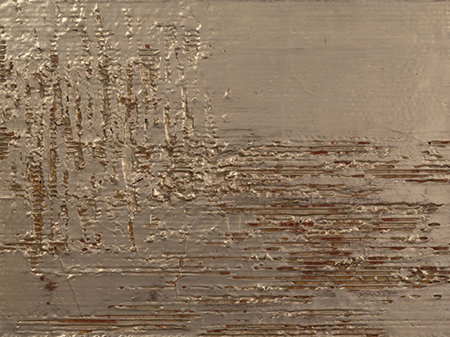 “Moon Gold,” organized by curator Ariel Plotek, is a mid-career retrospective and first solo museum show for New York artist Nancy Lorenz. Her mostly large-scale paintings, installations, panel screens, drawings, sculptures and boxes include over 85 works, some of which were inspired by the San Diego Museum of Art’s Asian collection. Having spent several years living in Japan as a young teen, Lorenz has been heavily influenced by the Japanese aesthetic. To earn a living, she trained as a restorer of antique lacquer objects and simultaneously began using some of these same techniques in her art. Large folding screens are adorned with water-gilding and mother of pearl inlay, applying the gilding technique using palladium, platinum, yellow gold and silver. Lorenz also draws from her time studying in Italy from the traditional gilt artists and the influence of the 1960s’ Italian arte povera movement.

“Moon Gold Mountain” (2018), from which the title of the exhibition originates, is a large vertical moon done in gold leaf, clay and cardboard on wood panel. This abstract expressionistic work is typical of the themes and style of most of the works here. The landscape images include various combinations of mountains, hills, skies, rain, wind and water elements. Some of her works combine the use of modest materials such as cardboard, burlap, glass, wood, and jute string. Lorenz makes her own lacquer using shellac and pigment, and uses a sculpting resin to transform packing cardboard into a ground for gilding. On these semi-corrugated surfaces, abstract scratches and patterns merge. Her “Pours” series is reminiscent of artist Lynda Benglis’ poured latex sculptures. “Pours” are small works that include a mix of sumptuous, sensual gestures of water gilding gesso and blackened silver and red-gold on glass and cedar wood. A highlight is “Rock Garden Room” (2004) a wood paneled ‘room’ using silver leaf, mother-of-pearl inlay, pigment, gesso and lacquer, giving it a connection to late Medieval and Renaissance gold ground panel painting. The works are part art and part alchemy.