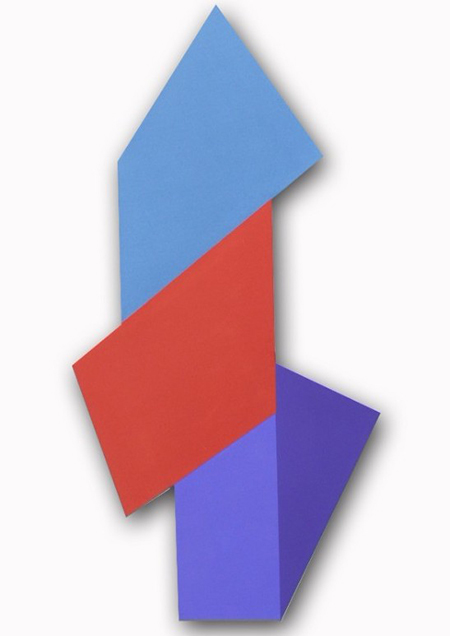 It has been over 50 years since the Guggenheim Museum’s landmark exhibition, “The Shaped Canvas” (1964) proclaimed independence from the heretofore seemingly unshakable reliance of artists upon the rectangular canvas or picture frame. In that exhibition, which included the early experiments of Frank Stella, the then radical shapes of the canvas often determined the patterns and shapes within, a rejection of the open-ended compositions of Abstract Expressionism and confirmation of the surface of the painting-as-object. Santa Fe-based artist Mohka Laget continues the exploration of this still fertile territory, and while she shares the hard-edge aesthetic employed by many of her artistic forebears, the kinetic sensibility of these paintings challenges, rather than reinforces, our inherit notion of flatness.

It is not as simple as suggesting there is a push-pull quality to Laget’s works, rather they challenge our perception with suggested movement in all directions. She playfully riffs on an array of influences, from Tetris-like puzzles, to architectonic constructions, to origami-evoking tessellations. The current series is a logical progression from earlier works, where the dynamic, if irregular, shapes seem arbitrarily cut short by the constraints of the traditional rectangular format. Equally enticing are the Algerian-born artist’s unpredictable color harmonies, blending tertiary with primary hues. This evokes the sophistication of Kenneth Noland and Karl Benjamin: cobalt blue meets lime green countered with tangerine, rust and murky teal. While the ever-shifting polygonal shapes of the canvases provide the initial impact, the overlapping forms and colors, alternately opaque and translucent, increase the illusionistic punch.