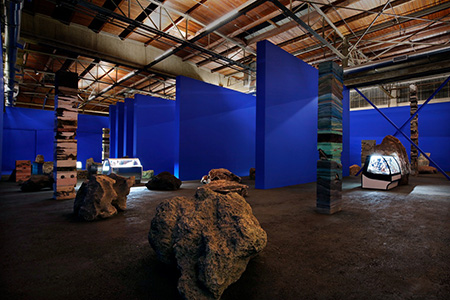 Adrian Villar Rojas is an Argentinean artist who gained international fame through his large-scale site-specific installations and by representing Argentina in the 2014 Venice Biennale. In 2017 he was commissioned by New York's Metropolitan Museum of Art to create a roof-top installation. In this current installation, "The Theater of Disappearance," Villar Rojas transforms the vast exhibition space into a quasi-undersea environment, a post-apocalyptic world filled with concrete columns and illuminated refrigerators populated with found and fabricated artifacts. The museum's floor is partly covered with dirt and the walls are painted royal blue. To make our way through the dimly lit galleries, we are given small flashlights with which to see the plethora of details within each work.

There are large porous rocks and tall columns that reference sedimentary layers formed over geologic time. Bones, animal and fish carcasses, detritus, fragments of clothing and electronics fill the large-scale industrial refrigerators that dot the installation, presented as relics from an unknown past. The darkened setting is ominous and threatening, if undeniably theatrical, making us feel transported to a far future from which we reflect on our own time as seen in the dim past. This immersive installation is stunning, thought-provoking and raw.