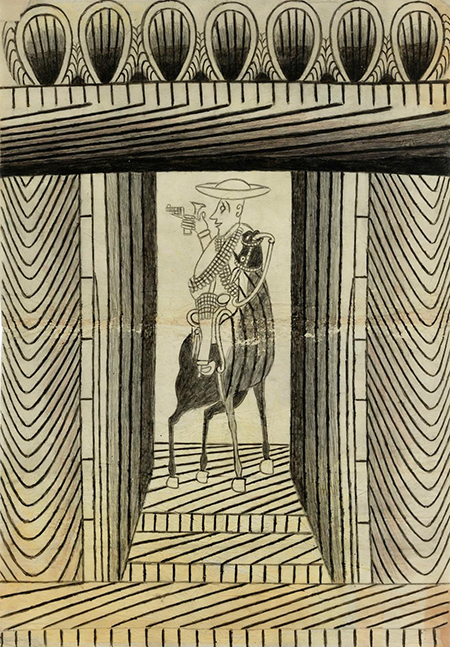 For its inaugural exhibition, the ICA LA (formerly the Santa Monica Museum of Art) presents an exhibition by self-taught artist Martin Ramirez (1985-1963). Ramirez was born in Mexico and came to the U.S. to find work in the 1920s. Diagnosed with schizophrenia, he spent over 30 years in institutions, where he began to draw. Although Ramirez was the subject of a comprehensive exhibition at the American Folk Art Museum in NYC in 2007, this exhibition represents the first comprehensive show in Southern California.

The 50 works included are beautifully installed in the spacious and well proportioned main gallery. Ramirez' works can be described as charming, childlike and naive, while being simultaneously keenly observant and imaginative in the ways they depict people and architecture. A magnificent 17-foot scroll describes his journey from Mexico to the U.S. in the 1920s. Despite his diagnosis and institutionalization, Ramirez was aware of American culture and how it differed from the climate of his Mexican childhood. In entitling the exhibition "Martín Ramírez: His Life in Pictures, Another Interpretation," and selecting works that "give voice to his transnational identity," the exhibition provides an opportunity to "recontextualize his life and work and navigate the unsettled territory between outsider and mainstream art.”