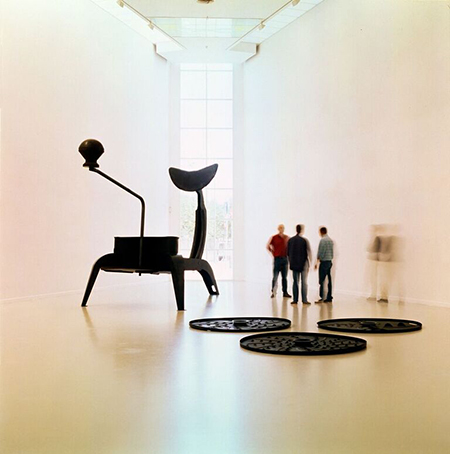 Mona Hatoum was visiting England in 1975 when the Lebanese Civil War broke out, leaving her unable to return to her native Beirut, thus essentially making her a refugee. Born to a Palestinian family in 1952 and raised in Lebanon, she has remained in London since that time. Consequently, dislocation and alienation are natural constants in her work, with an undercurrent of danger and a sense of precariousness. Hatoum’s work is seductive to the eye yet disturbing for what it evokes, and suggests an emotionally challenging process for the artist. Politics, gender issues, religion, race and mortality are all subjects she addresses in her work. Initially focused on performance art, in the late 1980s Hatoum shifted her focus to creating installations and objects. “Terra Infirma” surveys 56 works dating from 1991 to 2017.

Her installations and sculptures (which she calls “assisted readymades”) are typically constructed from industrial materials. For large exhibitions such as "Terra Infirma," she prefers to explore the local area prior to the installation, visiting flea markets and junk stores in search of objects that she can incorporate into her sculptures. For “Homebound” she filled a gallery with furniture and kitchen utensils, all connected with live electric cords that cause the lights to flicker and the electricity to crackle. This piece is viewed through a barbed wire fence, which adds to its disquieting ambiance. We imagine that the residents of the room may be under house arrest or they could be denied access to their home, a place of safety and refuge.

Hatoum transforms innocuous kitchen tools such as cheese graters or Cuisinart slicing discs into potential objects of torture simply by recreating them on a large scale. “No Way III” (1996) is a steel colander with nuts and bolts attached, making it threatening and rendering its original function useless. Hatoum also incorporates unlikely and challenging materials such as hair, human nails, toilet tissue, hair spray and sand into her work. “Silence” is an empty crib constructed from clear glass tubes, which reminds one of the fragility of life. “Impenetrable” consists of thousands of strands of barbed wire suspended from the ceiling, and though it speaks to war and borders, it is strikingly elegant. Other references to war include “Misbah” (translated to lantern), an installation of rotating images of armed soldiers projected onto the wall of an enclosed space; and “Nature morte aux grenades,” a table covered with brightly colored hand grenades crafted from Venetian glass. The quotidian may appear pretty dangerous in Hatoum’s interpretation, but the scale and presence make it all so bracing.