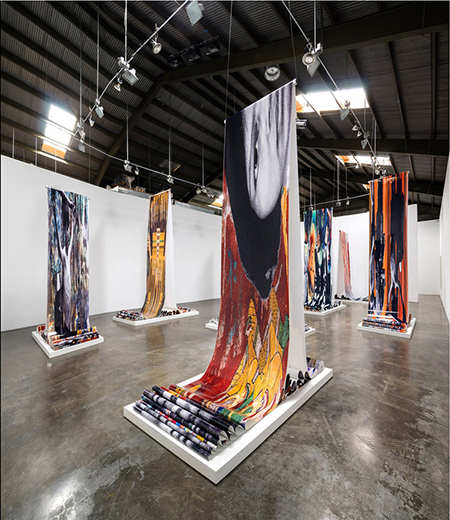 Although photographer Dinh Q. Lé was born in Vietnam in 1968, his family emigrated to Los Angeles as a result of the Vietnam War. He works in both Los Angeles and Ho Chi Minh City. Lé became well known for his photographs in which two images showing Vietnam's past and present were woven together as one would weave a traditional grass mat. In "The Scrolls: Distortion" Lé drapes rolls of processed photographic paper over supports near the ceiling, allowing the paper to cascade down to the floor on two sides, where it is carefully layered atop white bases. The scrolls are 164 feet long (the length of one roll of paper) and are filled from end to end with Lé's own images as well as appropriated photographs from Hollywood films about Vietnam, portraits from the S-21 prison in Cambodia, as well as fragments from murals in the Cambodian Royal Palace that depict the Cambodian epic poem “Raemker”, translated as “Glory of Rama.”

Because the scrolls are so long, most of the imagery is hidden from view. While the portion that spans floor to ceiling in the gallery is visible, it is interesting to imagine what else Lé depicts that is hidden from view. These amazing photographs are colorful amalgamations — collages of elongated and distorted images. Carefully layering past and present, fiction and reality, Lé's scrolls are landscapes that can never be completely seen. These works inspire us to think about the ways memories are distorted over time and how difficult it is to reconstruct a narrative from disparate fragments. In the scrolls, the visual effects are digitally enhanced and exaggerated. This distortion makes it hard to reconstruct the original images. Perhaps this is Lé's point. Like memory, as images are further and further removed from their original context their authentic purposes and meanings become obscured.