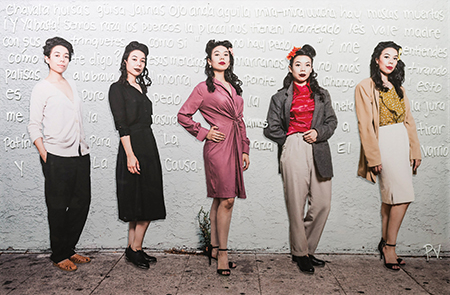 Curated by artist Oscar Magallanes, "Barrio Logos: Displacement and Vanishing Iconography" is a handsome survey of diverse works by California and Texas artists practicing a new wave of Chicano/a aesthetics. Working in a variety of approaches and mediums, a majority of the artists here address issues of gentrification. Gustavo Martinez photographically documents the changing landscape of Inglewood, while Patrick Martinez creates mixed media assemblages that memorialize the storefronts of displaced neighborhoods, complete with neon text. Vincent Valdez's ambitious large scale painted triptych “Burn, Baby Burn” visualizes a view of Los Angeles at night with Chavez Ravine — once home to a Latino community and the site of Dodger Stadium since the early 1960s — ablaze.

Several of the more compelling works in the exhibition are those that focus on the dignity of the people who make up the barrio community. In El Mac's portraits of Latino men wearing cowboy hats, each subject is sensitively humanized by the use of a bright or pastel monochromatic palette. Faces are sheathed in the artist’s signature patterns of undulating lines that suggest humanity's collective soul and interconnectivity. Cultural pride is powerfully articulated in Cindy Vallejo's digital self-portraits. She presents herself dressed in stylish 1940s fashion and shown standing before a backdrop of Chicano/a slang text.

Other impactful works include Juan Carlos de Luna's elegant mannequin dressed in a Zoot Suit fabricated from historical newspaper clippings about the Zoot Suit Riots that occurred in June, 1943; and Adriana Corral's moving tribute to the women and students who are among the missing from the Mexican border town of Juarez.  Look closely at this beautiful abstraction and you will realize that you are witnessing the names of victims, each reverently inscribed.