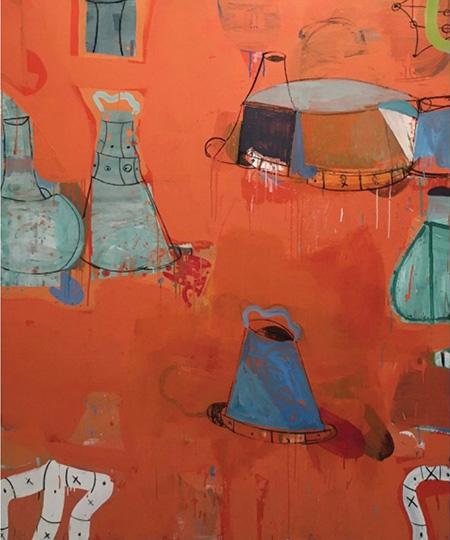 In his paintings, Gary Komarin uses recurring pictographic symbols, including cakes, vessels, hats and something he refers to as the “French wig.” In the large, bright “Carla Parla Italiano” pale turquoise beakers and containers are vaguely suggestive of chemistry class, while other forms are more mysterious. The symbol for Pi and a series of connected dots are drawn on the canvas, and other ghostly images are glimpsed beneath the layered surface. Komarin uses quick-drying latex house paint, which allows him to work quickly and spontaneously. He works on stretched canvases placed on the floor, moving around them rapidly with a large brush to establish a saturated color field on which to float his images. Komarin “paints faster than I can think and allows the paint to lead me,” using an improvisational technique that triggers free associations along the way.

As a student of Philip Guston at Boston University, and later as his studio assistant, Komarin worked his way through abstract expressionism before adding figurative elements back into his work. Among paintings dominated by shades of blue that reference water are “Suite of Blue Sea” and “A Suite of Blue Sea, Capri”. The former is distinguished by a wide swath of white suggestive of clouds floating above a loosely painted chair with a green and white cushion. A series of eight French wig paintings on paper, visualize yellow, orange, black and blue pageboys drawn on faceless heads. A wig is something one wears to cover up, embellish, or improve one’s appearance, and as such serves as a metaphor for Komarin’s technique. He layers on the paint, pausing to draw on the surface with a crayon or loaded brush before adding more washes of color. Also included are several pieces from his “Cake" series — two tall wedding cakes, five “petite cakes” framed together, and a gray confection labeled CAKE in childlike lettering. We get all the fundamental elements of Komain's oeuvre, but it is the large paintings that best reveal his considerable talent for color and composition.