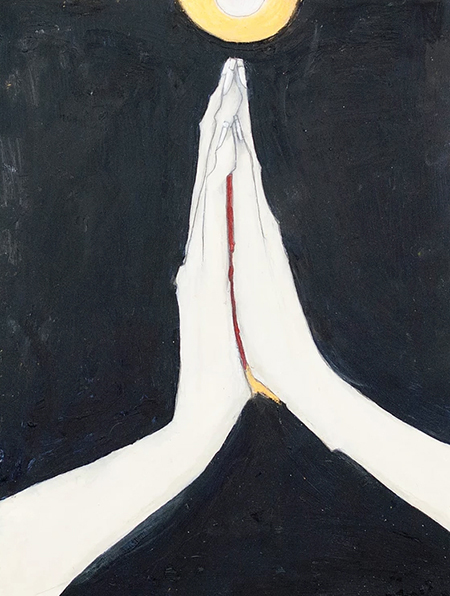 Fluid and comprised of graceful lines and lush shapes, Susan Connell’s “Gestures” is awash in color and swirling motion. Referring to her work an antidote to the often mean-spirited nature of today’s world, Connell uses just the barest, most suggestive lines and colors to communicate resonant, easily recognizable shapes and gentle emotions. A thin figure is poised in the palm of a hand, looking up, secure, elevated, Connell’s “Inner Voice.”

In “Meditation,” prayerful white hands are pressed together against a midnight-dark background. A golden orb that could be the sun or a church window hovers above them, a line of red and gold light appearing in the narrow seam between the hands. In “Pour Vous,” manicured, delicate hands offer a large open daisy, as enormous and appealing as a floral planet. If the image of the hands seduces the viewer in this example, it expresses a rush of longing in “Seduction,” which pairs a beckoning, even commanding gesture with a small, supple nude. Veering from soft and rounded to angular and aggressive forms, we enter Connell's exhibition as supplicants, and emerge from it with visual grace.