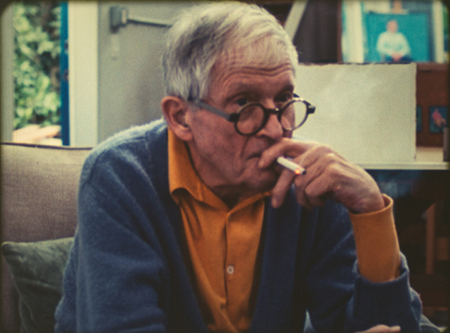 In "The Last Beautiful Pleasure" two films play in the darkened gallery space. Downstairs is a portrait of Sylvia Kristel by Manon de Boer; and upstairs, a portrait of David Hockney by Tacita Dean. What is striking in these filmed portraits is that both subjects are smoking and this activity — conscious and unconscious — is about so much more.

Their smoking functions as a metaphor for duration and pleasure. De Boer's short film "Sylvia, March 1 and March 2, 2001, Hollywood Hills" (2001-2005) portrays the French actress (best known for her role as Emmanuelle) outside, surrounded by nature yet tightly framed. As she gazes silently at the camera, smoke from her cigarette billows around her. Dean's “Portraits" (2016) depict David Hockney in his studio. He is shot both close up and from a distance as he inhales, exhales and casually flicks ashes onto to the floor without a care in the world. Although smoking is now looked down upon as a known health hazard, in film it is has long been accepted as a trope and an affect. In these films, Dean and de Boer investigate the visual power and pleasure of this activity.