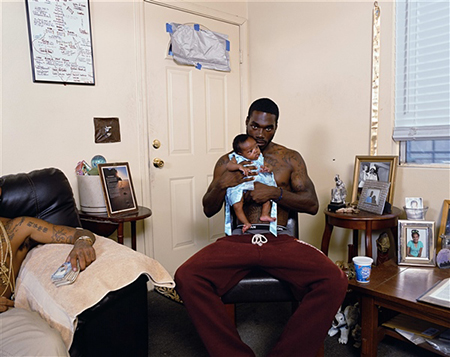 New York-based artist Deana Lawson has been an integral part of changing the trajectory of portrait photography, with an oeuvre dedicated to picturing the African diaspora around the world. Concurrent with her 2017 Whitney Biennial appearance, Lawson’s current Chicago exhibition is a series that features African Americans from cities across the U.S. Her signature aesthetics of deliberately posed subjects in intimate settings shines here, too, and the images teem with unexpected, narrative details.

The most striking photograph is "'Sons of Cush," a tableau of signifiers that encircle a man holding a baby girl. Around them are gathered family pictures, open books, a hand-drawn chart of Biblical lineages, and another man’s arm with a handful of cash. They read like clues into this individual’s experiences and personal history. But it’s also clear that this photo represents a mere moment in a life. Lawson has a masterful ability to communicate a wealth of information within a single frame, and also instill in the viewer that there is far more to this story. And to make us want to know.