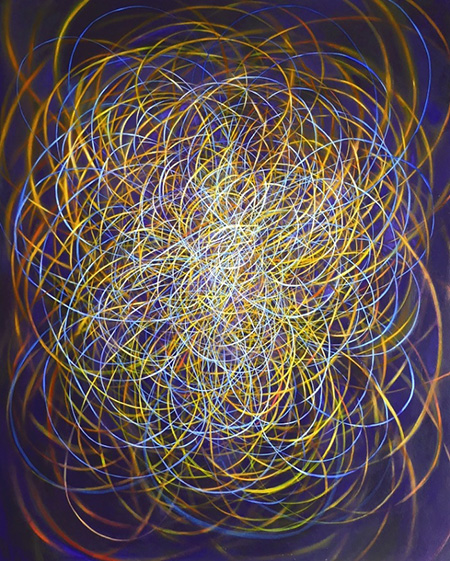 Shane Guffogg’s “Dance of Thought” is a motion-filled body of work that examines light, time and space. Working in oil, pastels and glass sculpture, Guffog’s use of vivid colors and striking dimensionality calls up both spiritual and scientific associations. The images knowingly reference subjects such as string theory and quantum physics. Guffog says his work presents its own language of signs and symbols. Using multiple layers of pigment and glazing medium, his paintings merge their brilliant palette with a sensation of continual motion that shimmers and shines. “Amor Fati #6” is an example of that motion and glow: ribbons that shift from golden to red are intertwined, like living creatures, but not specifically definable. The artist began his painting career as a realist, but he has evolved far beyond that label, delving into images which he describes as “a series of questions that makes the understanding of the answer plausible.”