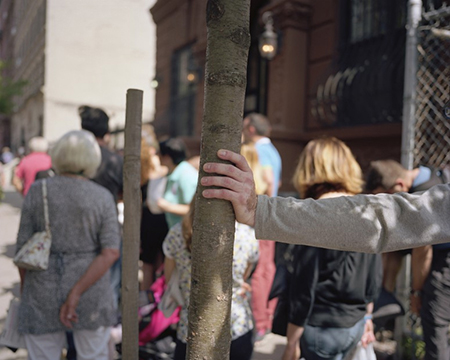 When Chicago-based photographer Dawoud Bey abandons portraiture (even momentarily), it's not merely a shift in subject matter; in this instance it's commentary, and a message in itself. Bey is a portraitist with an unmatched facility for making people so comfortable in his presence that he captures remarkably real, subtle and intimate expressions, even though his subjects are posed. In the artist's famous "Harlem, U.S.A." series from 1975-1979, we see a boy in sunglasses coolly leaning as he waits at the movie theater, a stern gaze from a busy barber, the beginnings of a smile from a man in a bowler hat.  "Harlem Redux" is the brand new series in this exhibition, and here there are no faces.

Bey recently returned to Harlem to observe the gentrification occurring in the historically African American neighborhood. In “Patisserie,” a middle-aged white man is plugged into a MacBook at a cafe table. In “Young Man, West 127th Street,” a figure in a striped jacket sits on a plastic construction pylon, his view completely obscured by a tall wall emblazoned with “No Entry.” Most telling though is “Tourists, Abyssinian Baptist Church.” The title suggests that we’re looking at New York’s first African-American Baptist church, though nowhere is this historic structure to be seen; we see only a blurry line of white people, and an obviously Caucasian hand resting on a tree trunk. The figures crowd the image, their backs to the viewers, physically present yet disconnected.