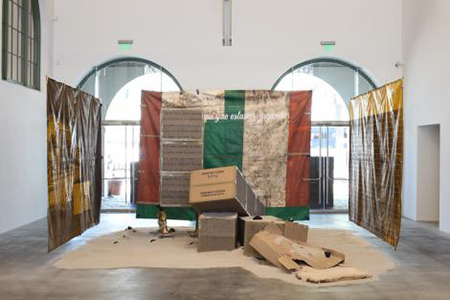 Mexico City artist Israel Meza Moreno — otherwise known as Moris — created the installation "Hermoso Passage" for the central lobby of the museum’s downtown gallery. Those unfamiliar with assemblage may initially recoil from Moris’ art: what are all these used taped and flattened cardboard boxes, sand, old stacked newspapers, rocks and drawings on thinly painted hanging tarps doing in the center of a museum space? The better informed may accept the arrangements of detritus at face value. But this is something else again, a replica of common encampments found throughout Mexico City, highlighting the urban poverty of many of its residents. Of course, the items in the installation are used by these homeless to provide shelter and safety, creating makeshift boundaries to protect themselves from crime and inclement weather. Moris’ selected materials are in no way different than the real world. The use of the Mexican flag may identify the country of Moris‘ ‘urban home,’ but could easily be a stand-in for many urban areas of U.S. cities where homeless people abound. By moving these enclosures to the stark and meticulously managed rooms of a museum or gallery, the issues of poverty and homelessness can be scrutinized in an entirely different way. What is missing, of course, are the actual people who inhabit these spaces. This disparity emphasizes the differences between the street world and the art world — one is merely a diorama of reality, the other is a truly devastating life. Can Moris’ constructions ever accomplish more than a demonstration of the ills of street life and can become a catalyst for social change?