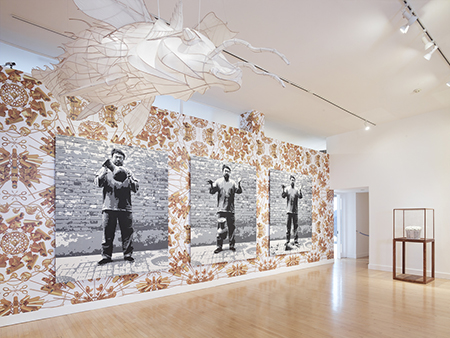 Ai Weiwei’s “Overrated" presents an eclectic mix of works, with messaging both subtle and very, very direct: one wall of the gallery features forty photos of the artist’s hand, prominently in the foreground and center, giving the middle finger to monuments around the world. The distain is clear. The other works in the show are slightly more subdued, even playful, beautiful and containing personal references. All the while Ai addresses difficult subject matter such as abuses of power. There are hanging kite-like bird sculptures that were previously shown at Paris at the department store Le Bon Marché, one of which is a likeness of the Twitter bird logo — the social media site that Ai frequents and, in particular, uses to spread his messages about people in peril.

Also featured are Lego self-portraits, a continuation of the Lego portraits Ai has been doing of victims of human rights violations that were presented in “Trace,” a highlight of his Alcatraz show in 2014/15. These call attention to the Chinese artist’s 2011 detention by his government as well as his defiance of Lego’s decree that their products not be used to political ends. While the other Lego portraits are full color, these are black-and-white—perhaps muted in tone the way the government was attempting to mute Weiwei. Additionally included is an all-white porcelain sculpture of flowers in a bicycle basket, similar to the porcelain works featured at Alcatraz Island.

All of this is set against the background of custom wallpaper. From a distance, the gold-on-white bold and repeating graphics say “Bling!” It has the appearance of extreme opulence, decoration you’d expect to see in a mansion or castle — or the monuments Ai is flipping off. Getting a closer look, we see that the paper features surveillance cameras and the Twitter logo. This is an intense display of art.