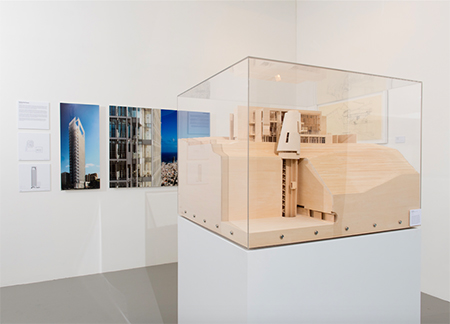 As the story goes, Richard Meier initially pursued a career as a visual artist, but after some not-so-positive critique from his New York abstract painter contemporaries like Frank Stella, he shifted focus to his other field of proficiency: architecture. On the occasion of the inaugural Chicago Architecture Biennial, “Richard Meier: Process and Vision” highlights the breadth of the renowned architect’s career. As the Jersey City headquarters of Mana Contemporary houses The Richard Meier Model Museum, this exhibition features mockups of earlier projects like The Getty Center and Atlanta’s High Museum, as well as newer structures like the Arp Museum in Germany, and the yet-to-be-completed Reforma Towers in Mexico City.

While Meier does mainly concentrate on his architecture practice, fine art has remained a secondary pursuit all along. In conjunction with the architectural paraphernalia of the exhibition is a side gallery dedicated to Meier’s screen print and collage works. In truth, the collages pale in comparison to the dynamic vision of his buildings, though viewing the two practices side-by-side also works to the artworks’ benefit in subtle ways. Compositional elements of Meier’s exquisite 1994 graphite rendering of The Getty Center reverberate in a 2014 black and white screenprint of a collage of found material. As a section of the collage is zoomed-in upon and blown up in the screenprint, the juxtaposition of the structural and the organic in the torn contours and worn text is suggestive of the high-contrast blocking of light and shadow in the landscape, ever evident in Meier’s architectural vision.