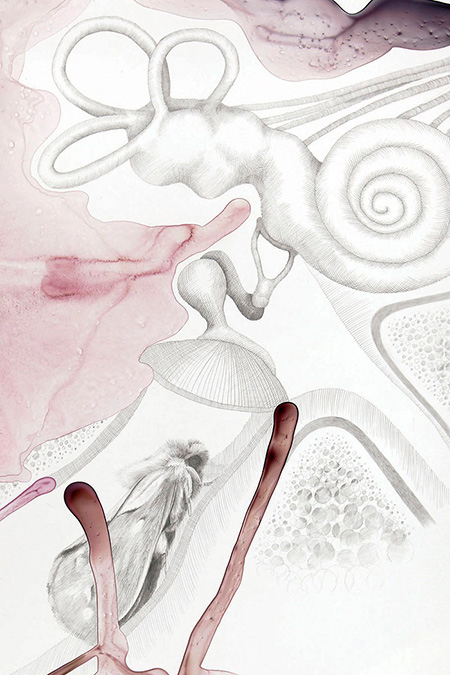 Prior to her career as an artist, Vesna Jovanovic worked in research laboratories; it comes as no surprise then that the exactitude and functionality of scientific illustration have become an integral part of the Chicago-based artist’s practice. “Foreign Bodies”  contains a series of seven large-scale works on paper. Each work begins with a spill of colored ink, allowed to stream along the slick surface of synthetic Yupo paper. After the liquid from the ink evaporates, the artist responds to the spontaneously generated composition, adding scrupulously rendered anatomical drawings in graphite.

However, it’s not just the dichotomy of chaos and precision that makes Jovanovic’s works compelling. In “Foreign Bodies” Jovanovic depicts objects alien to the human body embedded within her networks of bones and organs. Drawn significantly larger than life, they confront the viewer with all their visceral details. Some of these “foreign” objects are quite ordinary: breast implants, IUDs. Others are odd, like button cell batteries floating in a stomach. The live moth nestled in an ear canal makes one cringe. Though the human body has been exhaustively explored both scientifically and artistically, but Jovanovic shows us that the body is still strange and subjective, with the potential to surprise and confound.