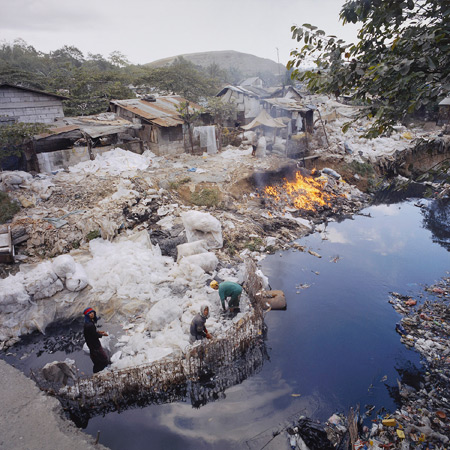 Among the 40 works on display in “Big Pictures,” two stand out as especially moving. One is “Camera Obscura Image of Times Square in Hotel Room.” created by Abelardo Morell in 1997. Morell made this unique piece by darkening a hotel room adjacent to Times Square with black plastic. The title tells the story. He turned the room into a camera obscura by piercing the plastic with 3/8-inch hole and setting up a view camera to capture the images streaming through the aperture for two days. The result feels strangely arterial. It’s a flood of Coca Cola logos, traffic and signage merging with the banal fixtures of that weirdly (un)familiar dwelling known to everyone — the hotel room. We discover a scissor cutout silhouette, cheap lamps, the obligatory bedside phone and a strangely sexy bed, roiling in lights and carefully made to be unmade. It’s a room fraught with possibility.

The second work especially worthy of note is Misty Keasler’s “Magic Mountain, Payatas Garbage Dump, Manila, The Philippines.” She states, “These places are monumental and it’s fitting that the photographs be large. It’s closer to the actual scale.” She’s captured a smoky ruin, a hazy landscape of waste and toxic fire. Surrounding the horrific and spilling dump is what one can only assume are shanties where the poorest of the poor live. Two people address the camera and watching their gaze is nearly too much to bear. This isn’t just good work; it’s (monumentally) important — as is this remarkably fine show.