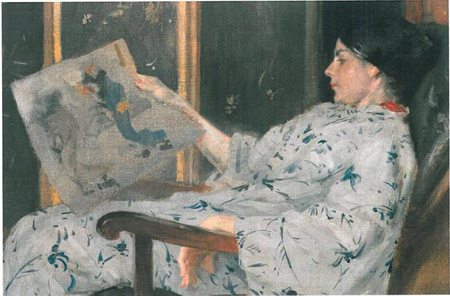 The West’s 19th-century infatuation with all things Japanese, or Japonisme, is explored through more than 250 works of art and decorative objects in “The Orient Expressed,” organized by the Mississippi Museum of Art. But the host venue has plenty to add. One lender wouldn’t allow a suite of prints by Mary Cassatt to travel, but the McNay owns the same seminal suite. It illustrates the era-defining flattened picture plane and broad swaths of color introduced to early Modernism by Ukiyo-e prints. Similar effects can be seen in two large-scale examples of French poster art by Henri de Toulouse-Lautrec and Theophile-Alexandre Steinlen, also from the McNay’s collections. Georges Despret’s giant leaping carp, drawn from the McNay’s Matthews Collection of Art Glass, could have been modeled on Katsushika Taito’s color woodcut “Carp Leaping from a Stream” (1840). Revealing the influence of Japonisme on American art, Robert Henri and William Merritt Chase each painted full-length portraits of Western ladies in Japanese garb; both are titled “The Blue Kimono.”