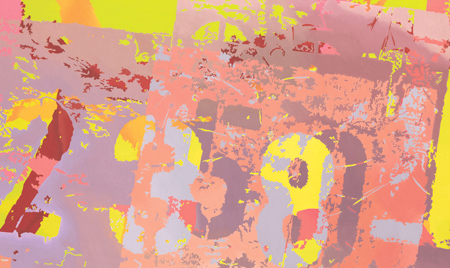 "You can never really see the whole of anything. The subject is by its very nature fragmentary. There are only systems of understanding, the endless investigation of a whole and its parts," Ingrid Calame explains to me on a balmy November morning in her studio, an unassuming industrial building on the outskirts of Echo Park. The last time I had seen her was traipsing the familiar halls of CalArts back in the early '90s, and really not that much has changed. She is still fiercely committed to an uncompromising working process that continues to yield some of the most innovative work being made today. Constructing her iconic "wall tracings," which are probably most akin to luminous galactic star clusters--fiery constellations that suggest both a microcosm of the human vascular system and the spaciousness of the night sky simultaneously--Calame embraces a multiplicity of practices. These include both drawing and painting, and employ a variety of surprising materials from enamel paint to colored pencil on trace Mylar, and finally oil paint. Calame has spent years devising a comprehensive working methodology that speaks directly to the elliptical and always shifting nature of urban topography.

Originally a native of New York, Calame made the move west to attend the California Institute of the Arts in 1992 as an experimental film major, and to this day continues her vigorous exploration of the LA landscape, having broadened her practice to include traces of the Indianapolis Motor Speedway, the NY Stock Exchange, and the Las Vegas Strip. This fall she had a solo show at James Cohan Gallery in New York; her newest exhibition is currently on view at the Monterey Museum of Art, as part of the museum's "In Process" series. Although she has been exhibiting regularly in New York, Germany, and elsewhere, the show marks the LA-based artist's first solo show in California since 2002.

Calame's artistic progression is at its core an inquiry not only into disintegration and decay--i.e., the leavings of a modern urban landscape--but has evolved into a more complicated human discussion. "ÒIn the beginning," Calame says, "the stains referenced mortality." With her recent works, the tracings having "transformed into palimpsests of other people's conversations, building mŽtiers of thought." Interestingly, Calame's work references film in that it is process-driven and has become increasingly investigative, involving more people, time and materials. Calame explains this evolution as moving from a more static working process that involved tracing stains on concrete in downtown Los Angeles, toward a broader organizational system that involves fastidious planning, working with assistants, who actually trace the stains at any given locations, and most importantly, selecting a particular landscape and then deciphering that space. "People are expressing their lives and relationships all the time, and it's important to me and my work that I continue to have adventures out in the world," Calame explains.

For Calame, the synthesis of experiences informing the creation of each work is itself a vital component in the work, and how it is perceived. The fact that her working method has grown to include a complex array of additional systems--that have become almost like an echo of the work itself with steep hilltops, deepening ravines and valleys of lines, shapes and forms--indicates perhaps that Calame is allowing these structures to encompass a wider array of human experience. After all, chemical stains, spillage, seepage, bits of tagging under a freeway overpass, and the general detritus of modern culture means that someone was there and has left a marker to denote their presence. Calame is simply giving this denotation meaning, a combination of an undeniable, universal human expression conjoined with her own. In her work, these "neglected spaces" as she calls them, are reclaimed, if only through a process of having been seen, reinterpreted, and finally transformed.

In Process: Ingrid Calame is currently on view at the Monterey Museum of Art in Monterey, CA. The exhibition runs from October 30, 2010 - February 27, 2011.
www.montereyart.org