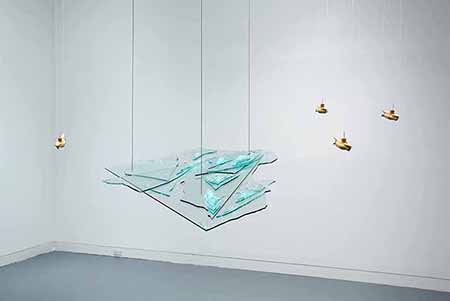 In its six decades exhibiting modern and contemporary art, the Orange County Museum of Art (OCMA) has consistently striven to transcend its conservative OC roots by presenting work by innovative and emerging artists from California and beyond. Artists the venue has shown (and collected) include John Altoon, Joan Brown, Lee Bul, Chris Burden, Mary Corse, Richard Diebenkorn, Catherine Opie, Charles Ray and Ed Ruscha. These and many other luminaries are represented in the inaugural exhibitions introducing OCMA’s new $93 million, 53,000-square-foot building on the campus of Segerstrom Center for the Arts.

Visitors to the gleaming modern structure with “OCMA” emblazoned on its slanted roof may be starstruck by the building’s curved façade, its expansive light-filled galleries, and a group of deftly curated exhibitions. Yet relatively few are aware that the new building and the artwork within it are just the latest chapter of a complex history and legacy.

OCMA’s first 8,000-square-foot iteration opened in October, 1962 as the Balboa Pavilion Gallery in Newport Beach’s Balboa Peninsula. The founders of the second-floor gallery — which they occupied free of charge — were 13 society women who believed that the burgeoning County of Orange needed a fine art venue. The 13 museum founders, referring to themselves as the “audacious” women, rolled up their designer sleeves to serve as preparators and curators in their nascent museum. They sought advice from museum professionals, who taught them about museology, connoisseurship, art restoration, care of museum pieces, museum management and administration. Their first professional Director was Tom Garver, recruited from Brandeis University’s Rose Art Museum. He was followed by the legendary Betty Turnbull as Exhibition Chairperson.

In 1977, the renamed Newport Harbor Art Museum (NHAM) moved to a larger site on San Clemente Drive in Newport Beach. In 1981, the museum hired Paul Schimmel (later Chief Curator at MOCA in downtown Los Angeles) as Chief Curator. During his eight years at OCMA, he acquired work by Chris Burden, Robert Irwin, Sol LeWitt, Claes Oldenburg, David Park, Charles Ray, James Turrell and many others. In 1984, Schimmel curated the first Newport Biennial, titled "Los Angeles Today," a survey of California artists including Mike Kelley, Jill Giegerich, Charles Garabedian and Ed Moses. He originated major exhibitions such as “The Interpretive Link: Abstract Surrealism into Abstract Expressionism, 1938-1948” (1986), which revealed generative connections between the Abstract Expressionists and the Surrealists, and “Chris Burden: A Twenty-Year Survey” (1988).

As NHAM garnered international attention, its board of directors began coveting the collection of California Impressionism and contemporary work owned by Laguna Art Museum (LAM), eight miles down Pacific Coast Highway. Local businesspeople positioned themselves on the boards of both museums and collaborated on a strategy. As Barbara Marsh wrote in the “Los Angeles Times” in March 1996, “[Gilbert] LeVasseur, as the Laguna Art Museum’s president, and [Chuck] Martin, a Newport Harbor Art Museum trustee, adroitly pulled together in a few days a proposed merger plan, something their respective institutions had tried to do for a decade.”

In 1997, a lawsuit regarding the merger was initiated by Laguna Art Museum members. Today, according to Laguna Art Museum Executive Director Julie Perlin Lee, the merger is unwound by a Settlement Agreement. OCMA kept a portion of significant artworks that were formerly in the Laguna collection, and returned many other pieces. In addition, OCMA returned to LAM $1 million in endowment money. Ownership of the land and museum building on Cliff Drive in Laguna Beach remains with LAM. And contrary to some rumors, OCMA does not claim Laguna Art Museum’s pedigree, which dates back to 1918.

Following the tumultuous period of the so-called “merger/unmerger,” the newly named Orange County Museum of Art doubled its exhibition space on San Clemente Drive. That expansion gave OCMA room to increase its display of important pieces from its permanent collection by Anne Ayres, John Baldessari, Bruce Conner, Richard Diebenkorn, Ed Kienholz, Ed Ruscha, and Andy Warhol, among many others.

In 2001, Elizabeth Armstrong became OCMA’s Chief Curator. She told me that year: “To really engage with a good work of art, you often stretch your mind. My goal as a curator is to present art that broadens horizons, enlightens, provokes, and turns people’s perspectives upside down.” Armstrong co-curated the museum’s 2002, ‘04 and ‘06 California Biennials, featuring artists such as Roman De Salvo, Mark Bradford, and Hank Willis Thomas. She also curated “Girls’ Night Out” (2004), displaying photography, video and film by 10 female artists, addressing identity and femininity, and “Birth of the Cool” (2007), mapping the emergence of mid-century California art and design. Armstrong has returned to co-curate the current “California Biennial 2022: Pacific Gold.”

In 2003, Dennis Szakacs became OCMA’s Executive Director, initiating traveling shows such as “Beautiful Losers” (2005), featuring skateboarding and street art culture. Before leaving the museum in 2014, he curated Richard Jackson’s “Ain’t Painting a Pain” (2013), anchored by several complex room-size installations, constructed with massive amounts of paint, a few based on classic artworks such as Jacques-Louis David’s “Death of Marat” (1793). The show also included a large sculpture of a peeing puppy, “Bad Dog,” installed on the museum roof.

Sarah Bancroft was appointed Chief Curator at OCMA in the early 2010s. The most important exhibition she mounted, and one of the museum’s most memorable shows, was “Richard Diebenkorn” (2012), featuring 80 of his paintings, prints, drawings, and collages. These included the artist's "Ocean Park #36" (1970), which is in the museum’s current “13 Women” exhibition (remember, the 13 women here are the original group of founders of the Balboa Pavilion Gallery). Bancroft wrote in the catalog describing Diebenkorn’s artwork, “The artist worked and reworked the canvases … building up not only layers but an array of abstract geometric relationships and lines as well, atmospheric fields and planes.”

Dan Cameron was hired as OCMA’s Chief Curator in 2012. His innovative, aesthetically stunning “California-Pacific Triennial” (2013), the first international survey of Pacific Rim artists in a California museum, filled the museum’s galleries, garnering critical praise. Cameron also familiarized himself with the museum’s permanent collection. One product of this was “California Landscape Abstraction” (2013-14), which examined the connection between landscape painting and the development of abstraction in Southern California art.

Cameron’s tenure was inexplicably cut short in 2015 to the dismay of many observers. Hannah Stamler wrote in “BOMB Magazine” in 2015, “With the recent announcement that OCMA fired five curatorial staff members, including Chief Curator Dan Cameron, it seems the museum is seeking a new vision of relevance. The layoffs come on the brink of an expensive planned relocation that will move the museum from Newport Beach to a new, larger home on donated land adjacent to the Segerstrom Center for the Arts … The move will herald a curatorial shift that places emphasis on OCMA’s permanent collection. OCMA will also highlight its modern, 20th-century holdings, and increase its number of modern art exhibitions.”

Anticipating that move, the newly hired Senior Curator Cassandra Coblentz mounted the museum’s 2017 Triennial, “Building as Ever,” with an emphasis on architecture, especially on the ephemeral nature of buildings. She wrote in the catalog that her exhibition affords “an opportunity to think deeply about what it means to simultaneously build up and tear down architectural structures” and to “respond to the question of permanence relative to the built environment.” Featuring 25 projects, many conceptually conceived and executed, the Triennial included Renée Lotenero’s “Stucco vs. Stone” (2017), a post-apocalyptic project of blown-up photos of medieval and Gothic style European buildings, most appearing to fall down on each other. Another dystopian installation, “This is Architecture” (2017) by Mexico City-based Santiago Borja, was a six-foot long grave, created by removing concrete slabs from the museum floor. It was said by the artist to explore the significance — or perhaps more emphatically the non-significance — of materiality.

In May 2018, OCMA announced that it was selling its Newport Beach space, and that it had a design for its new building to be constructed at Segerstrom Center. In October 2018, the museum, along with Coblentz, moved to an interim location in South Coast Plaza Village, a nearby shopping/dining destination owned by C.J. Segerstrom & Sons. At the temporary "OCMA Expand Santa Ana," she continued to mount conceptually oriented exhibitions. One Coblentz-curated show featured sculptural works made of hand-blown glass, volcano ash, lights and live plants by Hiromi Takizawa. The mesmerizing display evoked elements from nature.

OCMA was temporarily closed on March 14, 2020 in response to the COVID-19 breakout. It reopened briefly later that year, but soon after closed again as Covid continued to rage. By then ground had been broken (in September 2019) for OCMA’s new three-story building, designed by Morphosis Architects of Los Angeles. The in-progress museum remained in the public consciousness for more than two years, in part by hosting well-publicized hard hat tours of the building.

In 2021, Heidi Zuckerman, previously Director/Chief Curator of the Aspen Art Museum, was engaged as OCMA’s new CEO and Director. When this visionary Director was hired, she proposed celebrating the 13 museum founders’ ingenuity and foresight in an exhibition that would pay homage to the museum’s exceptional permanent collection.

The new OCMA was opened to the public on October 8th at 5pm. That opening, running for 24 hours, was reported to attract 10,000 attendees, with waits to enter the new building of up to three hours. Performances were held by various groups including the Pacific Symphony, Pacific Chorale, Orange County Youth Symphony, The Gospel Voices of OC, and a Cuban Latin Band. These were accompanied by dancing, films, tours, midnight fireworks, and sunrise yoga.

Among those attending the opening was Cody Lee, Laguna Art Museum’s former director of marketing, now communications officer at San Diego State University. “I was dazzled by the new OCMA,” he said. “The exterior and entrance space are bold, giving way to beautiful galleries with perfect lighting. The main level has eight large galleries, without a shadow or glare, and a linear gallery that fronts Avenue of the Arts and leads up a stairway to the mezzanine gallery. I saw some big hits from the permanent collection by John Altoon, John Baldessari, Barbara Kruger, and Agnes Pelton.” Works by these artists, along with other treasured paintings, sculptures, and assemblage pieces from the museum’s holdings, are featured in the above mentioned “13 Women,” curated by Zuckerman. The show, to be displayed for nearly a year, will involve multiple rotations of the venue’s most important works from the collection.

Throughout its 60-year history, the museum has changed its name, its home, its public image, and its staff numerous times. But the commitment of many creative individuals to acquire and show first-rate modern and contemporary art in skillfully curated settings has consistently served as its sustaining force, bringing OCMA to a position of national and international recognition and respect from which it launches its new era.