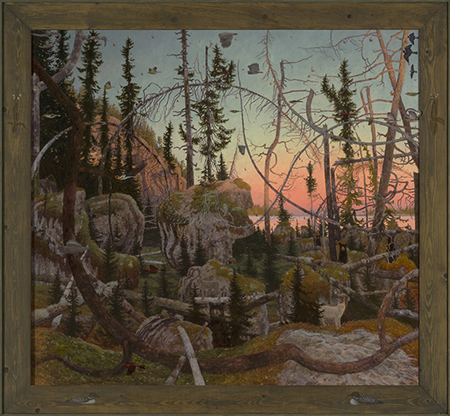 The minimalist glass-clad box that is the Figge Art Museum in Davenport, Iowa, perches sleekly on a rise across the street from the Mississippi River. Formerly the Davenport Museum of Art, the museum and its collection got a new home and a new name in 2005. Now it stands four blocks down the riverbank from its cultural opposite, Modern Woodmen Park, built in 1931, where the Quad City River Bandits play triple A baseball. There, homerun balls often land in the river.  At the Figge, homeruns can disappear into thin air.

They shouldn’t. Designed by British architect David Chipperfield, the Figge houses an encyclopedic collection of American and European art, including a tall stunning Beverly Pepper sculpture that stands sentinel in a stairwell, a number of Rembrandt etchings, the Grant Wood Archive, and one of the first and best collections of Haitian art in the United States. The contents as well as the design of the place strike a pleasingly incongruous note in this old timey Midwestern river town. Whether one happens upon it by following the scenic River Road down the Mississippi, or approaches it as a destination, the effect is the same — intrigue, surprise and a sense of geographic dislocation. The museum doesn’t match expectations of the place, so-called flyover country, and that’s the delight of it. Art shouldn’t match. Once inside, you realize you don’t know what you’ll encounter.

One of the Figge’s current exhibitions, the first since reopening, features exactly one painting and ten large-scale black and white photographs by Tom Uttech. The painting is spot lit, tucked away in an otherwise dimly lit back gallery, and it glows like an altarpiece, creating a quasi-religious effect. This is an apt and fortuitous pairing of museum and artist. Uttech is a Wisconsin painter, now in his late seventies, who for most of his career has been quietly rendering his personal vision of the north woods. He is well known in the Midwest, where he still resides, outside Milwaukee, but remains rigorously, perhaps defiantly, regional. He bases his work on hiking, camping and canoeing trips he’s made to northern Wisconsin, Minnesota and the Quetico Provincial Park in Ontario, wild places all, where he’s shot over 1,000 rolls of film. The images he brings back, the photos of course but particularly those he invents with paint, are unlike any woods most of us have ever seen except in our dreams. And who’s to say if it’s real? Who else has been to these places to say otherwise?

Uttech, acutely conscious that the places he loves don’t belong to him, titles all his works with native names that bear testament to the land’s original human inhabitants. The painting on view, from the museum’s collection (most of the photos are on loan from the Museum of Wisconsin Art) is titled “Kisibakwad,” an Ojibwe word. Uttech says it translates roughly to mean, “there is a sound produced by the rubbing of two trees against one another when they are agitated by the wind.” The title may refer to sound but suggests silence. The painting seems to be about both.

It is the nonhuman, non-tree inhabitants of this land that are Uttech’s central subjects. The work teems with densely entwined animal and vegetable life. Birds fill the sky as if in some uncanny swarm of a migration. Bears, bobcats, and wolves prowl and stare, some fully three dimensional, others transparent as ghosts. This crowded forest brings to mind the early months of the pandemic, when cars stayed in garages and, if only briefly, animals returned to take over highways and towns. That’s the norm in an Uttech painting.  “Kisibakwad” is backlit by a glowing pink sky reflecting off a pink-glazed river. The time of day in this painting could be either sunset or sunrise; study it, though, and a creepy fact will sneak up on you. The infusing pink light comes not only from behind but also from in front of the objects. This a place where sunrise and sunset happen simultaneously. Or maybe there are two suns illuminating this world. Or is it sunlight at all, and if not what exactly is the source of this light? And how does it get through this dense forest to bathe its inhabitants so lushly? This is not a place that follows nature’s laws as we understand them.

Often Uttech positions a large rock at the center of his paintings. The thing’s obdurate density refuses to explain itself. This vaguely ominous monolith looks as if it might be animate, like it might move of its own power or contain something volatile, and seems even more threatening after photographs reveal that a real version of the rock exists. As alien and made-up as Uttech’s paintings appear (“Kisibakwad” is not singular), they feel real, too. The photographs scarily prove it, full as they are of the same tangled, alien-looking vines all aglow with oddly lit carpets of vegetation.

Uttech never includes humans in his work, or anything human-wrought. He grants entry to a primordial place that is otherwise closed to us, a place of unimagined liveliness that does not welcome humans except through the portal of imagination. Uttech’s stated intention is mildly ecological — he says he hopes his work encourages concern for the well-being of nature. His coda, however, makes his true, mystical affinity clear. The best response to his paintings, he says, would be to “go to the wildest piece of land you can find and sit down to let it wash over you and tell you it’s secrets.”